I started into this semester with an interest in so-called Rechte Räume, meaning far-right spaces in the city. It was my interest to identify such spaces and examine them more closely. Because this topic is so incredibly broad and wide, I decided to break it down and examine Berlin in three different scales: The scale of the City, the Kiez (Neighbourhood) and the scale of a single building.

What are Rechte Räume?

The term "Rechte Räume" (right-wing spaces) describes spaces that are politically and symbolically charged with right-wing extremist, racist or anti-Semitic ideologies. I looked into different topics such as symbolism that bears references to colonial times, places which serve as meeting points for exchanging far-right ideologies, the large scaled Nazi project in the 30s and early 40s turning Berlin into the world capital called Germania and also critical or non-critical reconstruction. I have seen symbolism as something that is already visible but recognisable only for those who already know the history behind it and its context today. Symbolism is therefore something that can be made visible. 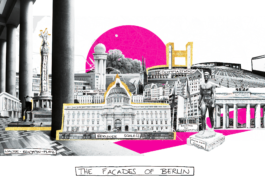 On the scale of the city, the first impression of Berlin does not necessarily include the complete context and all dependencies. Coming to Berlin for the first time, this might be your impression of the city. You would go to the touristic spots, visit the Humboldt Forum, have a picnic at Tempelhofer Feld or just pass unremarkable and inconspicuous buildings. 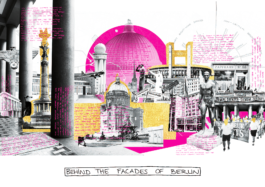 Though if we take a closer look and draw the lines to past events, directions from which fundings are coming or just inform ourselves about the political context of places, Berlin might look a little different. The context of places allows us to truly understand its symbolism. By delving further into the history of Berlin and Germany’s past, a lot comes to the surface. Of course, that’s very exaggerated as the true density of these places is much lower and they are actually spread all over the city. But by bringing them so close together we get a glimpse of what is laying behind some of the facades in Berlin.

To be able to look at it more closely and also on a more human scale, I decided to examine the kiez where I used to live until last year: The Weitlingkiez.

I concentrated on the main street of the Kiez, Weitlingstraße, as this is where most of the shops and restaurants are and where there is the most traffic. I approached it using the mapping method.

The Herzlich Bäckerei is located at the very end of Weitlingstraße on the corner of Lückstraße. It has been part of my weekend routine for months and I passed it every day to catch the bus. Only while researching the Weitlingkiez I came across the past of this building. 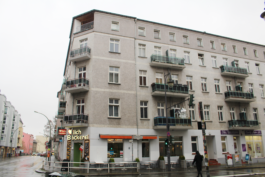 In 1990, the building of the Herzlich Bäckerei was one of the houses that were squatted by Neo-Nazis. They succeeded in getting a legal tenancy after some time. During that time, Weitlingstraße 122 formed one of the most important centres for neo-Nazis in all of Germany and Europe.

On June 23 1990, a demonstration was initiated by a broad Berlin alliance against the Nazi house in Weitlingstraße.